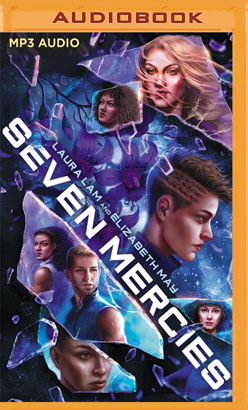 By: Laura Lam, Elizabeth May

The second book in a feminist space opera duology that follows the team of seven rebels who will free the galaxy from the ruthless Tholosian Empire--or die trying.

After an ambush leaves the Novantae resistance in tatters, the survivors scatter across the galaxy. Wanted by two great empires, the bounty on any rebel's head is enough to make a captor filthy rich. And the seven devils? Biggest score of them all. To avoid attacks, the crew of Zelus scavenge for supplies on long-abandoned Tholosian outposts.

Not long after the remnants of the rebellion settle briefly on Fortuna, Ariadne gets a message with unimaginable consequences: the Oracle has gone rogue. In a planned coup against the Empire's new ruler, the AI has developed a way of mass programming citizens into mindless drones. The Oracle's demand is simple: the AI wants its daughter back at any cost.

Time for an Impossible to Infiltrate mission: high chance of death, low chance of success. The devils will have to use their unique skills, no matter the sacrifice, and pair up with old enemies. Their plan? Get to the heart of the Empire. Destroy the Oracle. Burn it all to the ground.