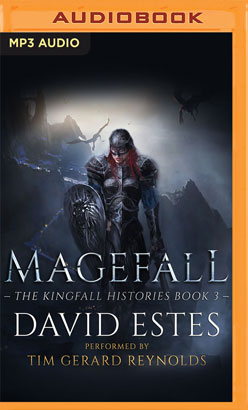 Be bright but do not burn. Embrace the darkness but do not live in the shadows.

The secrets of Kingfall's mage prison, Lockspell, have been buried for far too long. When mages Quill and Rondo are sentenced to a lifetime of hallucinations in Lockspell, only their mettle, desire for justice, and a chance encounter can help them escape. But what they discover in doing so may leave them wishing they'd stayed.

In the north, King Jarrod Gaard faces an unexpected threat from the mages at Aeromand. Meanwhile, his counterpart in Solarii, Queen Rose Ontarii, must combat an even graver danger - one living within the bounds of her palace. To the east, Prince Sampson must adapt to the realities of losing his shadowblade and returning to the darkness, while his lifelong guardian, Roman, seeks to destroy the blade before it can destroy his ward. On the Lost Plains, Grym fights to maintain unity amongst the Grizari's Scattered Tribes as war brews with Avadon.

To the south, Dragonmaster Dane is reunited with someone from his past, someone from his present, and someone from his future, each of whom may shed light on the shadows that have clouded his mind ever since his bonding day. Unbeknownst to Dane, his bondmate, Dragonmistress Peony launches a rebellion to retake the dragon throne and tear down the dragon-human crossbreeds responsible for the destruction of Chrysallis. Finally, Ando seeks a new life for him and his men only to crash headlong into his worst enemy yet. Lurking in the shadows are the Thousands and their Unforgiven overseers. If the creatures that once plagued Kingfall find the light, none are likely to survive.