May You Live in Interesting Times 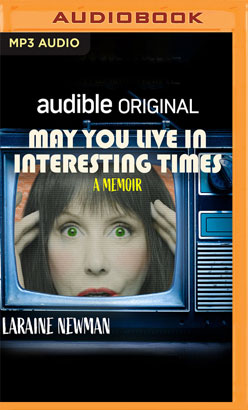 May You Live in Interesting Times

“Not only is May You Live in Interesting Times a riveting memoir of Laraine's life and stellar body of work, but just hearing the genuine charm in her voice will make you fall in love with her. An extraordinary treat.” (Alan Zweibel, Emmy Award-winning writer and cocreator of It's The Garry Shanding Show)

“Hearing Laraine Newman's amazing life story told by the comic genius and comedy pioneer herself is an experience you hope will never end. I loved every second of it.” (Paul Feig, director of Bridesmaids, The Heat, and Spy)

“Laraine Newman's writing is fun and smart enough as it is, but to get to hear her warm, weary voice reading her words? This is beyond a win-win.” (Patton Oswalt, Emmy and Grammy Award-winning comedian and actor)

From growing up in Los Angeles with movie star neighbors, bearing witness to the music scene in the 1960s and seeing the rise of comedy in the early 70s, to studying mime in Paris under the tutelage of Marcel Marceau to becoming a founding member of the seminal comedy troupe The Groundlings, it's no wonder that Lorne Michaels offered Laraine Newman a spot in the original cast of Saturday Night Live. There, along with famous cast members John Belushi, Dan Aykroyd, Chevy Chase, Jane Curtain, Garret Morris, and Gilda Radner - Bill Murray was passed over at first and joined in a later season - Laraine was part of the show that changed TV - and comedy - forever. But it isn't all yuks and glamor. Laraine struggled with demons, arriving in New York City with an attraction to drugs that started as a vice and grew to be an all-consuming addiction - even as she skyrocketed to fame via her memorable characters on SNL.

May You Live in Interesting Times is a warm, funny, heartfelt snapshot of 1970s New York City and SNL's unexpected rocket to success, with all the giddy headiness that that entailed. After five seasons, Laraine left SNL, and worked in movies and television while having adventures and relationships in Hollywood that, in her words, “should have gotten me killed.”

Now with long term sobriety, she became a parent and reinvented herself as a voice-over actor and has a thriving career working on such animated favorites as Finding Nemo, Monsters, Inc., Despicable Me, Inside Out, Shrek, and Minions.