Music Maker of Auschwitz IV, The 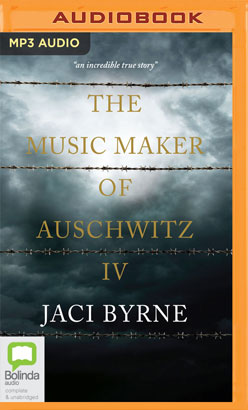 Music Maker of Auschwitz IV, The

The inspirational true story of an Allied POW appointed Kapellmeister to the Nazis in Auschwitz.

When called up to fight in yet another World War, Drum Major Jackson promises his beloved wife Mabel he will return to serenade her once again. But when he’s captured, transported to Poland and imprisoned in Auschwitz IV, his dream is shattered. That’s until his Nazi captors appoint him their ‘Kapellmeister’ (maker of music).

Jackson seizes the opportunity. And he documents everything in a secret diary. Everything…

The Music Maker of Auschwitz IV, based on Jackson’s diary and written by his granddaughter, Jaci Byrne, is a thrilling testament to the resilience one man found in the darkest of times through his two greatest loves – music and the woman who waited for him.

'I was gripped by this book. It is a must-read.'
Kenneth G. Ross, Australian playwright of Breaker Morant