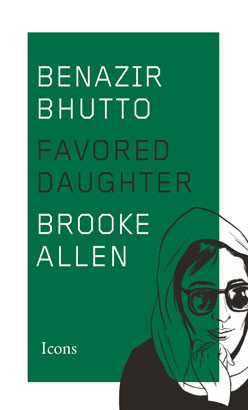 The story of Benazir Bhutto, the first woman to lead a Muslim nation, seems lifted straight from Greek tragedy. Born to privilege as the daughter of one of Pakistan’s great feudal families, she was groomed for a diplomatic career and was thrust into the political arena when her father, Pakistan's charismatic and controversial prime minister, was executed. She then led Pakistan, one of the most turbulent and impoverished nations in the world, through two terms as prime minister in the 1980s and 1990s, but she struggled to ward off charges of corruption and retain her tenuous hold on power and was eventually forced into exile. Bhutto returned to Pakistan in 2007, only to be assassinated in Rawalpindi after a triumphant speech.

Including interviews with key figures who knew Bhutto and have never before spoken on the record, Benazir Bhutto: Favored Daughter illuminates Bhutto’s tragic life as well as the role she played as the first female prime minister of Pakistan. Celebrated literary critic Brooke Allen approaches Bhutto in a way not many have done before in this taut biography of a figure who had a profound effect on the volatile politics of the Middle East, drawing on contemporary news sources and eyewitness reports, as well as accounts from her supporters and her enemies.