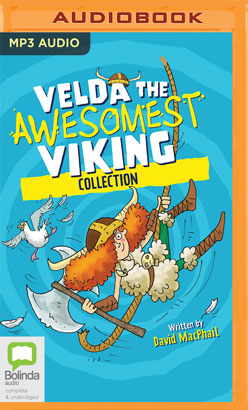 Oi, you snivelling pig-dogs! Are you ready for a Viking adventure? Join Velda while proving she's the awesomest Viking around.

Velda the Awesomest Viking and the Voyage of Deadly Doom

Velda is a small girl with a big axe. The only problem is, everyone thinks she can't be a proper Viking because she's 'just a little girl'. PURLEASE! She sets sail with Freya, captain of the dragonship Valkyrie, and her notoriously ferocious crew for a life of awesome adventure (and very loud belching).

But when the Valkyrie and her crew are captured by the Queen of the Saxons, Velda is the only one who can free her friends. The small and mighty Viking must travel to the mysterious Islands of Deadly Doom, but there's just one problem, er, well more than one, actually – she doesn't have a ship, a crew or a clue how to get there....

Velda the Awesomest Viking and the Ginormous Frost Giants

Velda is a small girl with a big axe, and she knows how to use it. Alongside her misfit crew, she's living her best Viking life, sailing the seas in her very own longship and teaching anyone who thinks she's 'just a little girl' a lesson.

But when a raid on the vault of the treasure-obsessed Count Stollenberg goes wrong, Velda is forced into a deal to bring him the legendary Frost Hammer. The only teensy tiny issue is that it belongs to the Frost Giants, who are anything but teensy tiny. Velda and her crew must trek across snow and ice to break into the giants' mountain home, but it seems the Frost Giants are happier to see them than they expected. A bit too happy, in fact...