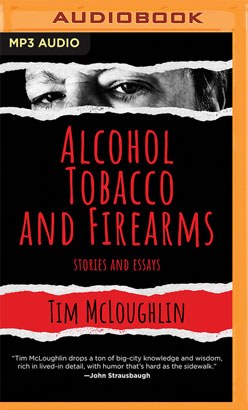 An enthralling collection of short fiction and nonfiction that draw upon McLoughlin's three-decade career in the criminal justice system.

"Whether writing fact or fiction, McLoughlin does so with an ear to the street. His Irish cops are as good as anything by Richard Price, and his essays about New York City life are incomparable. Alcohol, Tobacco, and Firearms is to be devoured in bite-sized bits but savored like a four-course meal. Get this book!" (T.J. English, author of The Westies: Inside New York's Irish Mob)

"Reading Alcohol, Tobacco, and Firearms is like being a fly on the bathroom wall of my favorite shitty cop bar in south Brooklyn where the horrible and the hilarious are beating the crap out of each other over a game of eight ball. I loved it." (Lydia Lunch, author of So Real It Hurts)

In Alcohol, Tobacco, and Firearms, Tim McLoughlin draws upon his three-decade career in the criminal justice system with his characteristic wit and his fascination with misfits and malfeasance. A lifetime immersed in New York City feeds short stories that evoke a landscape of characters rife with personal arrogance and misjudgment; and nonfiction essays about toeing the line when the line keeps disappearing.

An opioid-addicted cat sitter electronically eavesdrops on his neighbors only to hear devastating truths. A degenerate gambler stakes his life on a long shot because he sees three lucky numbers on the license plate of a passing car.

In the nonfiction essays, we learn that the system plays a role in supporting vice, as long as it gets a cut. Altar boys compete to work weddings and funerals for tips in the shadow of predatory priests. Cops become robbers, and a mob boss just might be a civil rights icon. McLoughlin shines a light on worlds that few have access to.

A recurring theme in his urban, often New York-centric work is chronic displacement, people standing still in a city that is always changing. These are McLoughlin's ghosts, these casualties of progress, and he holds them dear and celebrates them.