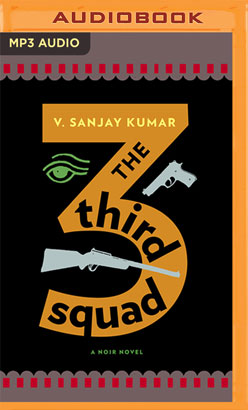 A police sharpshooter with Asperger's syndrome is tasked with cleaning up the streets of Mumbai in this “gripping thriller” (Booklist).

In recent decades, ostensibly to combat the rising tide of criminality in Mumbai's underworld, the Indian Police Service has carried out many hundreds of extrajudicial assassinations of suspects. Karan, an expert sharpshooter in an elite branch dispensed with dishing out this vigilante justice, has a difficult choice: Should he continue to blindly follow orders from his superiors, regardless of their moral standing, or take matters into his own hands and do what he believes to be right?

Belonging to a hit squad whose members all fall somewhere along the autism spectrum, Karan is notorious for his ruthless precision and efficiency, yet he remains aloof and distant. Gradually, his impenetrable façade begins to crack, and Karan's emotional and psychological depth reveals itself as he is forced to make decisions where the stakes are literally life-and-death.

“A melancholy cop's obsessions are just the tip of the iceberg as he leads a two-fisted team determined to clean up Mumbai's mean streets.... Kumar's style, blunt but often by turns poetic and droll, is arresting.... As unusual as it is compelling, this entry lays the groundwork for an entertaining series.” (Kirkus Reviews)

“Kumar has created some thoroughly intriguing characters...but the most fascinating of Kumar's characters is Mumbai itself - enormous, crowded, hyperactive, roiling, stunningly rich and grindingly poor, and teeming with almost unfathomable energy. International-crime fans should flock to this one.” (Booklist)