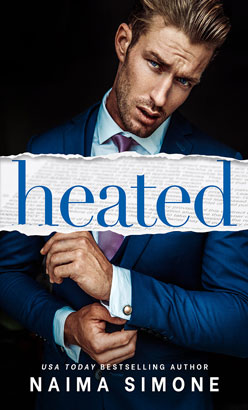 From USA Today bestselling author Naima Simone comes Heated, a sizzling novel about a breakup professional who embarks on a fake relationship with a client’s ex—the one person she wasn’t supposed to fall for.

Why? Because people break up—and sometimes they should. But when I learn that entertainment attorney Cyrus Hart is someone else’s mistake, I can’t believe it. He’s smart, successful, and sexy as hell.

When a chance encounter with Cyrus turns into something more, I can’t help but fall for him. Our chemistry is undeniable. But his ex used my company to send him that letter—and that’s a problem. Especially since he doesn’t know I own the company.

How can this possibly work? I know from experience that the riskiest ventures are the worthiest ones…but falling for Cyrus Hart may be my biggest gamble yet.

I’m a man with a plan—college, law school, a great career. So far, so good.

Until a stranger shows up on my doorstep and reads me a breakup letter from my girlfriend. My carefully laid plans unravel.

But then I meet someone new. It’s spontaneous. It’s electric. And it’s not according to plan.