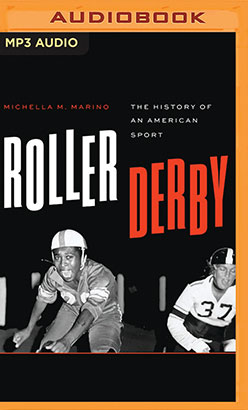 The History of an American Sport

Since 1935, roller derby has thrilled fans and skaters with its constant action, hard hits, and edgy attitude. However, though its participants' athleticism is undeniable, roller derby has never been accepted as a “real” sport. Michella M. Marino, herself a former skater, tackles the history of a sport that has long been a cultural mainstay for one reason both utterly simple and infinitely complex: Roller derby has always been coed.

Drawing on oral histories, archival materials, media coverage, and personal experiences, Roller Derby is the first comprehensive history of this cultural phenomenon, one enjoyed by millions yet spurned by mainstream gatekeepers. Amid the social constraints of the mid-20th century, roller derby's emphasis on gender equality attracted male and female athletes alike, producing gender relations and gender politics unlike those of traditional sex-segregated sports. In an enlightening feminist critique, Marino considers how the promotion of pregnancy and motherhood by roller derby management has simultaneously challenged and conformed to social norms. Finally, Marino assesses the sport's present and future after its resurgence in the 2000s.