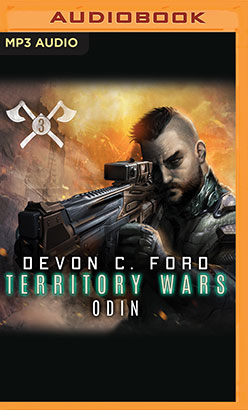 Both sides take a step back to regroup, after a desperate battle over one system leaves the Combined States and the New Russian Confederacy reeling from heavy losses.

Utilizing the might of their allies, the Combined States push for control over systems that would cut the NRC's supply lines and force them to sue for peace.

Now a fledgling member of the elite Special Operations Group, Sergeant Mike Barton finds himself attached to Odin Nine-Five for a mission to shatter the food supply lines of their enemies in the outer reaches.

The epic finale in the Territory Wars series by Devon C. Ford. Grab your copy today!