Three Sheets to the Wind 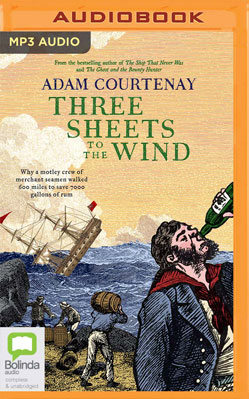 Three Sheets to the Wind

A rollicking account of a little known event that changed the course of Australian history from bestselling author, Adam Courtenay.

By the bestselling author of The Ship That Never Was, how a motley crew of merchant seamen walked 600 miles to save 7000 gallons of rum.

When Campbell & Clark, Scottish merchants based in India, dispatched an Indian ship hurriedly renamed the Sydney Cove to the colony of NSW in 1797, they were hoping to make their fortune. The ship's 'speculative' cargo included all kinds of products to entice the new colony's inhabitants, including 7000 gallons of rum intended to be sold to the Rum Corp, which ruled the fledgling colony with an iron grip, despite the arrival of Governor John Hunter. But when the ship went down north of Van Diemen's Land, cargo master William Campbell and 16 other crew members decided to walk the 600 miles to Sydney Town to get help and rescue crew and cargo.

Clark and just two others made it, having been assisted by at least six Aboriginal Nations and seeing far more of the country than Joseph Banks ever did. Clark's reports to Hunter led to Bass and Flinders' 'discovery' of Bass Strait and the beginnings of a sealing industry. And the rum? Some of it was saved, and returned to Sydney and into the hands of the Rum Corp.