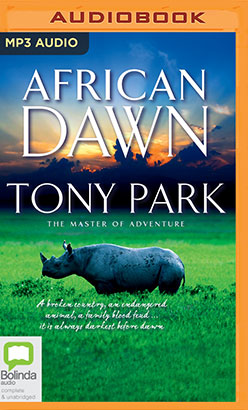 “Park sorts out his heroes and villains with admirable pacing and inventiveness.”
The Sydney Morning Herald

“Thriller writer Tony Park can be best described as an Aussie cross between Wilbur Smith and Tom Clancy.”
The Independent Weekly

Against a backdrop of the savage African landscape, this is a spellbinding account of betrayal, tragedy, love and loss through the generations in Zimbabwe.

In the broken country that is Zimbabwe, only the strongest can survive.

Three families - the Bryants, the Quilter-Phipps and the Ngwenyas - share a history as complex and bloody as the country itself.

But the brothers’ own history is fraught, and when they fall in love with the same woman, Natalie Bryant, their rivalry threatens to not only derail the attempt to save the rhinos, but also puts the lives of all involved at risk. And with Emmerson vowing to stop at nothing until he has control of the farm, a bloody showdown seems inevitable.

With blood feuds still to settle, every one of these players will be drawn into the fray, and not one will remain unscathed.