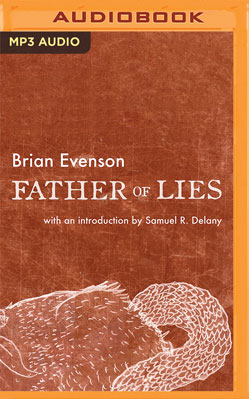 A fearless, scathing, and irresistible novel about madness, power, and the hypocrisy of religious institutions.

Lay provost Eldon Fochs is a happily married father of four. Based on his disturbing dreams, he may also be a sex criminal. His therapist isn't sure, and his church is determined to protect its reputation. Written from the perspectives of Fochs, his analyst Dr. Alexander Feshtig, and the letters exchanged between Feshtig and his superiors in the church hierarchy, Father of Lies is Brian Evenson's fable of power, paranoia, and the dangers of blind obedience. It offers a terrifying vision of how far institutions will go to protect themselves against the innocents who may be their victims.

This edition includes an introduction by Samuel R. Delaney (Dhalgren).

“Father of Lies stands out among Evenson's work as the most institutionally critical, morally unsettling.” —Vice

“Packed with the kind of psychological tension that creates classics and a critique of organized religion that's too loud, clear, and sharp to ignore.” —Horror Talk

“[Evenson's] scary fictional treatment of church hypocrisy has the feeling of a reasoned attack on blind religious obedience.” —Publishers Weekly