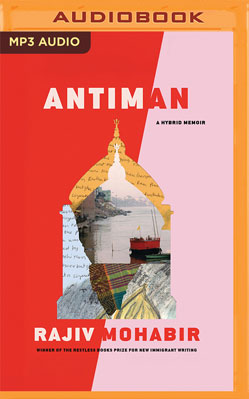 Winner of the Restless Books Prize for New Immigrant Writing, Rajiv Mohabir's Antiman is an impassioned, genre-blending memoir that navigates the fraught constellations of race, sexuality, and cultural heritage that have shaped his experiences as an Indo-Guyanese queer poet and immigrant to the United States.

Growing up a Guyanese Indian immigrant in Central Florida, Rajiv Mohabir is fascinated by his family's stifled Hindu history and the legacy of his ancestors, who were indentured laborers on British sugarcane plantations. In Toronto he sits at the feet of Aji, his unlettered grandmother, listening to her stories and songs in her Caribbean Bhojpuri. By now Aji's eleven children have immigrated to North America and busied themselves with ascension, Christianity, and the erasure of their heritage and Caribbean accents. But Rajiv wants to know more: where did he come from, and why does he feel so out of place?

Embarking on a journey of discovery, he lives for a year in Varanasi, on the banks of the Ganges, perfecting his Hindi and Bhojpuri and tracing the lineage of his Aji's music. Returning to Florida, the cognitive dissonance of confederate flags, Islamophobia, and his father's disapproval sends him to New York, where finds community among like-minded brown activists, work as an ESL teacher, and intoxication in the queer nightlife scene. But even in the South Asian paradise of Jackson Heights, Rajiv feels like an outsider: “Coolie” rather than Desi. And then the final hammer of estrangement falls when his cousin outs him as an “antiman”—a Caribbean slur for men who love men—and his father and aunts disown him.

But Rajiv has learned resilience. Emerging from the chrysalis of his ancestral poetics into a new life, he embraces his identity as a poet and reclaims his status as an antiman—forging a new way of being entirely his own. Rapturous, inventive, and devastating in its critique of our own failures of inclusion, Antiman is a hybrid memoir that helps us see ourselves and relationships anew, and announces an exciting new talent in Rajiv Mohabir.