Road to Winter, The 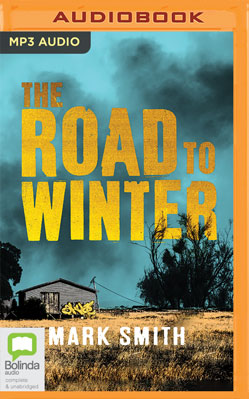 Road to Winter, The

Since a deadly virus and the violence that followed wiped out his parents and most of his community, Finn has lived alone on the rugged coast with only his loyal dog Rowdy for company.

He has stayed alive for two winters—hunting and fishing and trading food, and keeping out of sight of the Wilders, an armed and dangerous gang that controls the north, led by a ruthless man named Ramage.

But Finn’s isolation is shattered when a girl runs onto the beach. Rose is a Siley—an asylum seeker—and she has escaped from Ramage, who had enslaved her and her younger sister, Kas. Rose is desperate, sick, and needs Finn’s help. Kas is still missing somewhere out in the bush.

And Ramage wants the girls back—at any cost.

‘It’s easy to see why Mark Smith’s dystopian thriller has been compared with John Marsden’s Tomorrow When the War Began. I barely came up for breath as the pages flew. So strap yourself in for a high action ride.’ Kids Book Review

‘A riveting story of survival that questions the prices of freedom and safety as well as the value of an individual life…A breakout new series full of romance, danger, and a surprisingly engaging world.’ STARRED Review, Kirkus Reviews

‘It’s been suggested more than once that dystopian fiction has had its day…but The Road to Winter is a welcome sign that there’s still life in the genre.’ Armadillo