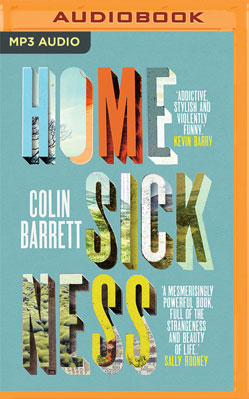 The second book from the “exact and poetic” (New York Times) author of critical smash Young Skins, winner of the Rooney Prize for Irish Literature and a National Book Foundation 5 Under 35, Homesickness is an emotionally resonant and wonderfully wry collection that follows the lives of outcasts, misfits, and malcontents from County Mayo to Canada.

When Colin Barrett's debut Young Skins published, it swept up several major literary awards, and, in both its linguistic originality and sharply drawn portraits of working-class Ireland, earned Barrett comparisons to Faulkner, Hardy, and Musil. Now, in a blistering follow up collection, Barrett brings together eight character-driven stories, each showcasing his inimitably observant eye and darkly funny style.

A quiet night in a local pub is shattered by the arrival of a sword wielding fugitive; a funeral party teeters on the edge of this world and the next, as ghosts simply won't lay in wake; a shooting sees a veteran policewoman confront the banality of her own existence; and an aspiring writer grapples with his father's cancer diagnosis and in his despair wreaks havoc on his mentor's life.

The second piece of fiction from a “lyrical and tough and smart” (Anne Enright) voice in contemporary Irish literature, Homesickness marks Colin Barrett out as our most brilliantly original and captivating storyteller.