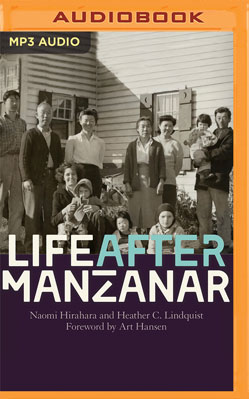 “A compelling account of the lives of Japanese and Japanese Americans incarcerated during World War II...instructive and moving.” (Nippon.com)

From the editor of the award-winning Children of Manzanar, Heather C. Lindquist, and Edgar Award winner Naomi Hirahara comes a nuanced account of the “Resettlement”: the relatively unexamined period when ordinary people of Japanese ancestry, having been unjustly imprisoned during World War II, were finally released from custody. Given $25 and a one-way bus ticket to make a new life, some ventured east to Denver and Chicago to start over, while others returned to Southern California only to face discrimination and an alarming scarcity of housing and jobs.

Hirahara and Lindquist weave new and archival oral histories into an engaging narrative that illuminates the lives of former internees in the postwar era, both in struggle and unlikely triumph. Listeners will appreciate the painstaking efforts that rebuilding required and will feel inspired by the activism that led to redress and restitution—and that built a community that even now speaks out against other racist agendas.

“Through this thoughtful story, we see how the harsh realities of the incarceration experience follow real lives, and how Manzanar will sway generations to come. When you finish the last chapter you will demand to read more.” (Gary Mayeda, national president of the Japanese American Citizens League)

“An engaging, well-written telling of how former Manzanar detainees played key roles in remembering and righting the wrong of the World War II incarceration.” (Tom Ikeda, executive director of Densho)