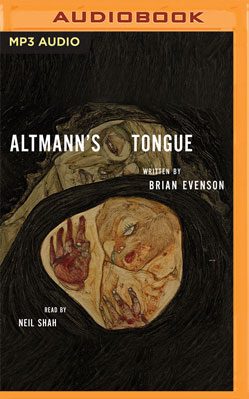 Stories and a Novella

Evenson's first collection of 25 short stories and one novella, Altmann's Tongue (1994), garnered comparisons to Paul Bowles, Poe, and Kafka and is considered by many an existential masterpiece.

Chilling and severe, these stories reveal humans struggling with the brutality of the world and with one another, and trying to talk their way out of their own helplessness and fear.

In Evenson's world, moral and social categories dissolve and mutate, and our own understanding of our relationship to reality itself seems increasingly vexed and contingent. A father buries his daughter without telling his wife that she has died. A man commits two murders, one justified, the other not, and then undergoes a startling transformation. A detective wanders through a case, becoming further and further estranged from even the possibility of truth.

"Showing off Evenson's myriad skills, the stories range from rural tales of death to a retelling of the biblical Job story, in which a skeletonized Job trades barbs and blows with a murderous lumberjack.... There is a detached brutality to the collection, similar to Beckett's novels, which, due to Evenson's precise control over language, is both disturbing and compelling." (Review of Contemporary Fiction)