Woman with Two Shadows, The 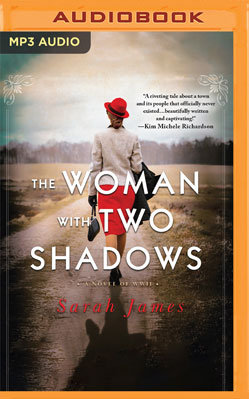 Woman with Two Shadows, The

A Novel of WWII

"A riveting tale about a town and its people that officially never existed and the secrecy behind one of the Manhattan Project's top-secret cities!" (Kim Michele Richardson, New York Times best-selling author of The Book Woman's Daughter)

For fans of Atomic City Girls and The Secrets We Kept, a fascinating historical debut of one of the most closely held secrets of World War II and a woman caught up in it when she follows her missing sister to the mysterious city of Oak Ridge, Tennessee.

Lillian Kaufman hasn't heard from her twin sister since Eleanor left for a mysterious job at an Army base somewhere in Tennessee. When she learns, on an unexpected phone call, that Eleanor is missing, Lillian takes a train from New York down to Oak Ridge to clear up the matter.

It turns out that the only way into Oak Ridge is to assume Eleanor's identity, which Lillian plans to do swiftly and perfectly. But Eleanor has vanished without a trace—and she's not the only one. And how do you find someone in a town so dangerous it doesn't officially exist, when technically you don't exist either?

Lillian is thrust into the epicenter of the gravest scientific undertaking of all time, with no idea who she can trust. And the more she pretends to be Eleanor, the more she loses her grip on herself.