Every Spring a Parade Down Bay Street 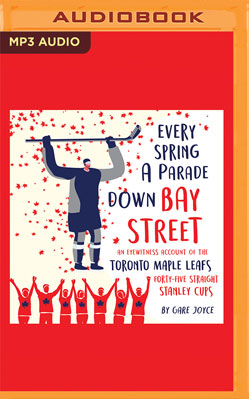 Every Spring a Parade Down Bay Street

Red York has seen it all: the Maple Leafs' 45 consecutive Stanley Cups, Toronto's designation as a United Nations World Heritage Site, the emergence of the Toronto Telegram as the nation's greatest newspaper. Now, in response to at least two readers' requests, and with the aid of a ghostwriter whose name he can't ever remember, the award-winning columnist has penned a definitive history of the city of Toronto in the back half of the 20th century. This to-the-best-of-my-recollection memoir is something that he if no one else believes is a Canadian treasure and the definitive account of the greatest phenomenon in sports: the sheer domination of the Toronto Maple Leafs in National Hockey League and Olympic competition.