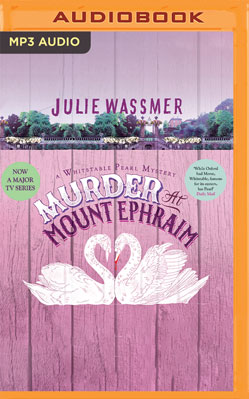 Pearl and McGuire are thrust together again as partners in crime in this ninth instalment of the popular Whitstable Pearl Mystery series, from bestselling author, Julie Wassmer.

Pearl Nolan receives a wedding invitation from an old school friend she hasn't seen for years. Amy, a journalist, has chosen somewhere very special for her wedding ceremony – the 17th century Kent country house of Mount Ephraim. Nestled in an 800-acre estate, Pearl sees this break as a chance to leave crime behind, along with her own detective agency and her restaurant, The Whitstable Pearl.

Accepting Amy's invitation, Pearl also looks forward to meeting the happy couple's friends and family, as well as Amy's fiancé, Guy, a handsome and successful adventurer who appears to be Mr Perfect. She also has time to reflect on her own engagement to Canterbury CID detective, DCI Mike McGuire...

But before any wedding bells sound, murder strikes – and Pearl and McGuire are thrust together again – as partners in crime.

'While Oxford had Morse, Whitstable, famous for its oysters, has Pearl.'
Daily Mail

'As light as a Mary Berry Victoria sponge, this Middle-England romp is packed with vivid characters.'
Irish Independent