What a Glorious Time It Was! 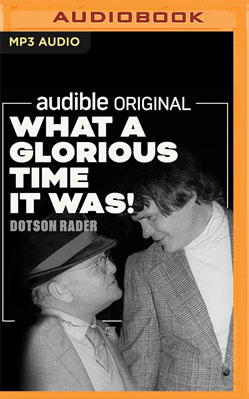 What a Glorious Time It Was!

Being Young in the Exuberant Seventies

Dotson Rader arrived in New York in 1963, a young stranger to the city, knowing no one, owning nothing - until a few lucky events opened up an extraordinary new world for him. Through his words, we enter this ardent, unforgettable world of writers, artists, radicals, and sexual rebels in a time of unprecedented cultural freedom and defiance. Against the backdrop of the women's rights, gay liberation, civil rights, and anti-war movements, a singular new period of experimentation and liberation is born. Here, Dotson Rader chronicles what it was like to be young in America in the extraordinary time he calls, “the glory days".

At the center of What a Glorious Time It Was! is the close friendship between Rader and celebrated American novelist Truman Capote, whose personal struggles embodied the conflict of this era: rebellion against society, body, and mind, and the cost at which it came.

Brazen, humorous, and heartbreaking, What a Glorious Time It Was! appeals to memoir listeners looking to dive into remarkable lives unlike their own.