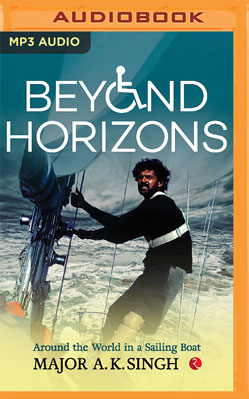 Around the World in a Sailing Boat

In 1987, thirty-seven footer Trishna, crewed by army officers, became the first Indian boat to circumnavigate the globe. They braved rogue waves sweeping away life-saving equipment, sailed through pods of whales frolicking perilously close, survived the worst storm to have hit Sydney in nearly a century, taking over fifteen months and covering over fifty thousand kilometers. Major A.K. Singh, one of the members of this historic crew, vibrantly describes the epic voyage. His impressions of training at the National Defense Academy in Pune by men of integrity, who shaped his values in life, are humorous and sardonic. Later, as an army officer, he planned a sail around the world in a sailing boat. Fate struck his leg was tragically amputated consequent to a hang gliding crash. Could he still sail round the world? Did he still want to? Disclosing the making of the Indian army officer with anecdotes and real-life examples of his comrades, several of whom have since lost their lives in valiant action, A.K. Dwells upon the richness of life, irrespective of tribulations and disabilities. 'Living it right' for him is larger than the record he sets inadvertently, becoming the first physically handicapped person to sail around the world in a yacht. Beyond Horizons describes a rousing adventure and is a humbling yet inspiring tribute to the indomitable human spirit.