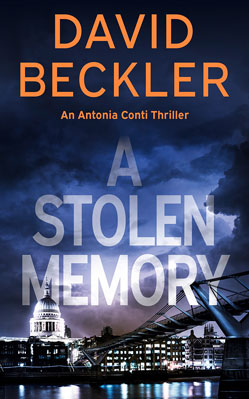 This time there’s more at stake than just her life—now they want to take her past.

London, the near future. GRM, a shadowy company running private prisons, has introduced a programme to alter prisoners’ memories, removing those that led to their criminal behaviour. When journalist Antonia Conti hears rumours that the technology has deadly side effects, she decides to investigate.

Antonia has looked into GRM’s corrupt dealings with the government before, and when a stolen lorry ploughs into a whistle-blower’s car, leaving him dead and her trapped in the burning vehicle, she’s convinced GRM are responsible. Enlisting her old friend DI Russell Chapman to check out the supposed ‘accident’, she discovers that he’s already investigating three other deaths that appear suspiciously linked to her own investigations.

The deeper Antonia probes, the more her friends and colleagues are at risk. Whatever sinister experiments GRM are conducting, they are determined to keep them secret. By any means necessary. Can Antonia and Chapman thwart them before anyone else loses their life? Or their mind?