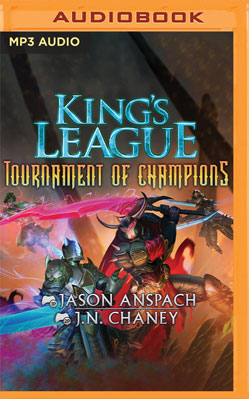 The end is nigh.

For the first time in King's League history the developers have made concessions to their rules and brought Dirk back from the dead. After such a close call, he's more focused than ever on bringing his A-game to the tournament.

Things are going well. Until a player with no armor nearly succeeds in taking everything from him. This one moment thrusts Dirk into a dark world of uncertainty about not only himself, but also whether he's on the right path altogether.

When Graydon throws another wrench into the already murky situation with a new vision, Dirk is once again spurred into action. In order to find the sword, he and his friends will have to travel to parts unknown first. They learn there is one truth that can be depended on:

Hints are never what they seem when given by a Trickster God.

All roads lead to the tournament but the trials are just beginning and not just for Dirk. Friends and enemies alike are put to the test in the final chapter of King's League. The only question that remains to be answered is who will win it all?

Find out in the long-awaited conclusion to this epic LitRPG adventure by Associated Press and USA Today best sellers Jason Anspach and J. N. Chaney!