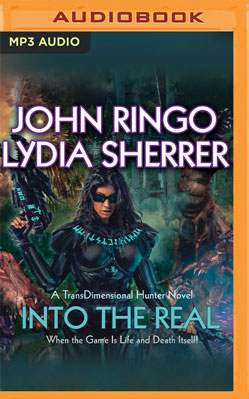 Lynn Raven may be the boss master of WarMonger 2050 with her online persona of "Larry the Snake", but when the CEO of Tsunami Entertainment personally asks her, as a favor, to beta test a new augmented-reality game, she has to face her greatest fear: going outside and dealing with, ugh, people.

As she becomes more immersed in the game, the stakes rise and so do the obstacles. Strife between teammates, a ruthless rival team, and these strange glitches that make it seem like the game algorithm (or maybe “game AI”?) has it in for her. Now she has to face a new fear: Is she willing to step into the real to win the future she's always wanted?

What do you do when a game and real life merge?

About Into the Real:

"The futuristic world of the gamers and the game itself will interest sf readers.... YA: Teens will relate to Lynn, the main character, and if they are gamers, they will enjoy her gamer and VR adventures." (Booklist)