Come to the Edge 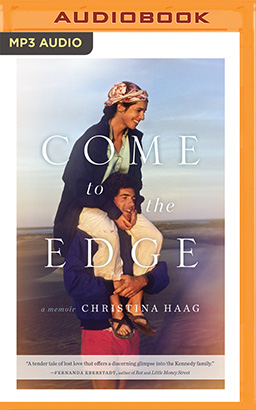 Come to the Edge

When Christina Haag was growing up on the Upper East Side of Manhattan, John F. Kennedy, Jr., was just one of the boys in her circle of prep school friends, a skinny kid who lived with his mother and sister on Fifth Avenue and who happened to have a Secret Service detail following him at a discreet distance at all times. A decade later, after they had both graduated from Brown University and were living in New York City, Christina and John were cast in an off-Broadway play together. It was then that John confessed his long-standing crush on her, and they embarked on a five-year love affair. Glamorous and often in the public eye, but also passionate and deeply intimate, their relationship was transformative for both of them. With exquisite prose, Haag paints a portrait of a young man with an enormous capacity for love, and an adventurous spirit that drove him to live life to its fullest.

A haunting book, Come to the Edge is a lasting evocation of a time and a place—of the indelible sting of the loss of young love, and of the people who shape you and remain with you, whether in person or in spirit. It is about being young and full of hope, with all the potential of your life as yet unfulfilled, and of coming of age at a moment in New York’s history when the city at once held danger, magic, and endless possibilities for self-discovery.

Rarely has a love story been told so beautifully.

Praise for Come to the Edge

“With unfailing grace, sensitivity, and tact, Christina Haag re-creates in poignant detail her prolonged romance with John F. Kennedy, Jr., who struggled to fathom the meaning of his life. The author never stoops to tabloid sensationalism or cheapens this rare glimpse into America’s royal family. However charming the hero or scenic the backdrop, the memoir is tinged with the tragic darkness that inevitably shadowed the Kennedy clan, with death and danger forever lurking just beyond camera range. Jackie Kennedy Onassis floats through the narrative as an enchanting presence who is appealing in her wisdom and bounty. This is a beautiful and, in the end, unutterably sad book about fleeting innocence, blighted hope, and the elusive nature of youthful love.” —Ron Chernow, author of Washington: A Life

“Sensual and full of longing, Come to the Edge is a haunting, timeless love letter, a universal tale of romance. Christina Haag has crafted a delicate memoir of love for a man we think we know and lay claim to, but, in truth, she is writing about all of us: our youth, our hopes, our own first kisses and dreams of romance. From the first word, my soul leaped at recognition. Gorgeous!” —Erin Cressida Wilson, award-winning screenwriter of Secretary and Fur

“We know how the story ends, of course. Girl loses boy. Boy loses everything. But in this finely drawn, indelible portrait of a friendship and love affair, Christina Haag illuminates the private world of one of our nation’s most legendary families. Come to the Edge should be read not only for its fascinating insider’s view, but because it’s a brave, human, beautiful, wrenching memoir.” —Dani Shapiro, author of Devotion