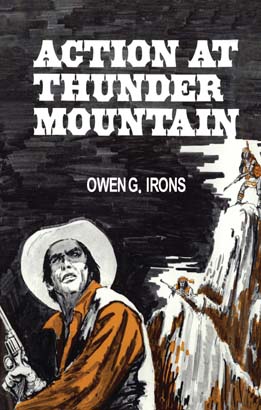 Shy Whitaker, chief scout at Fort Thomas, was on the run. Accused of the murder of a trooper, unable to prove his innocence, his only chance was to escape across the border into Mexico. The sands of the desert changed his mind, however, for they held signs of a gathering of Indians around Manso, the Apache chief. To the experienced scout, the signs meant only one thing—the Indians would attack Tylerville, the closest settlement. Shy knew the town’s only chance was to be warned in time. So he turned back from the border, heading into the mountains, toward Tylerville—and almost certain capture.

Shy was not alone in the desert. Hard on his trail was a tracking party from the fort, led by an embittered commanding officer and a brash young lieutenant. Scouting for the party was Shem-Day, second scout at the fort, who seemed to have a personal mission to make sure Whitaker wasn’t brought back alive.

But these were not the only searchers in the shadow of the towering Dragoons. There was Thurm Mosely, a bear of a man determined to find his wife Rebecca and niece Lilith, who had disappeared into the wilderness with Roland Traynor, Lilith’s fiancé. And there were Cey Hollister and Royce Del Campo, obsessed with their search for a fabled gold mine.

And watching, waiting for them all was Thunder Mountain, ruling the clouds and storms, sheltering the legacy of the ancients, holding the secrets of wealth and honor, of life and death.