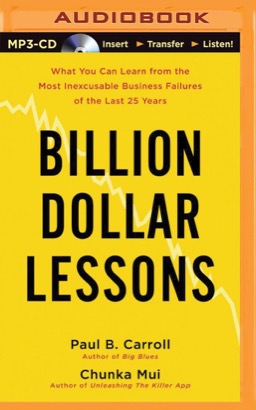 By: Paul B. Carroll, Chunka Mui

“This book is your chance to learn from others’ mistakes.” —Entrepreneur

In the 1960s, IBM CEO Tom Watson called an executive into his office after his venture lost $10 million. The man assumed he was being fired. Watson told him, “Fired? Hell, I spent $10 million educating you. I just want to be sure you learned the right lessons.”

There are thousands of books about successful companies but virtually none about the lessons to be learned from those that crash and burn. Now Paul Carroll and Chunka Mui draw on research into more than 750 flameouts to reveal the seven biggest reasons for business failure.