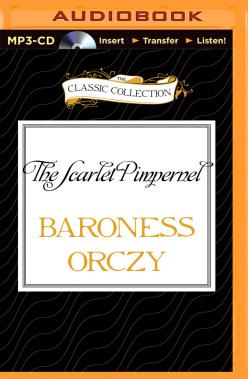 Perhaps the most famous alias of all time, The Scarlet Pimpernel hides the identity of a British nobleman who, masked by various disguises, leads a band of young men to undermine the Reign of Terror after the French Revolution.

The Scarlet Pimpernel makes daring raid after daring raid into the heart of France to save aristocrats condemned to the guillotine. At each rescue, he leaves his calling card: a small, blood-red flower—a pimpernel—mocking the power of Robespierre and his Committee of Public Safety.

Having been told that his own wife was an informer who delivered an aristocrat into the hands of the Committee, the Scarlet Pimpernel must keep his identity and work a secret while he struggles against the love he feels for her. Until the day her own brother is taken prisoner.…

This novel is part of Brilliance Audio's extensive Classic Collection, bringing you timeless masterpieces that you and your family are sure to love.