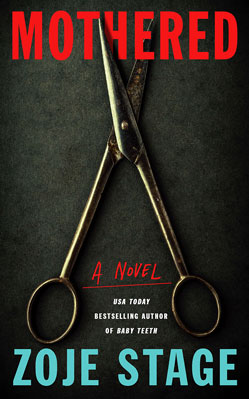 From the USA Today bestselling author of the international sensation Baby Teeth comes a claustrophobic psychological thriller about one woman’s nightmarish spiral while quarantined with her mother.

Grace isn’t exactly thrilled when her newly widowed mother, Jackie, asks to move in with her. They’ve never had a great relationship, and Grace likes her space—especially now that she’s stuck at home during a pandemic. Then again, she needs help with the mortgage after losing her job. And maybe it’ll be a chance for them to bond—or at least give each other a hand.

But living with Mother isn’t for everyone. Good intentions turn bad soon after Jackie moves in. Old wounds fester; new ones open. Grace starts having nightmares about her disabled twin sister, who died when they were kids. And Jackie discovers that Grace secretly catfishes people online—a hobby Jackie thinks is unforgivable.

When Jackie makes an earth-shattering accusation against her, Grace sees it as an act of revenge, and it sends her spiraling into a sleep-deprived madness. As the walls close in, the ghosts of Grace’s past collide with a new but familiar threat: Mom.